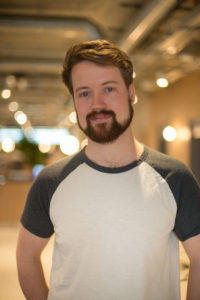 Colin Palmer is CTO of Citizen Ticket, a ticketing platform that is working to fight problems in the event ticketing industry. He is responsible for the company’s technical direction, including overseeing a recent move into blockchain with their new product, BitTicket.

What problems are Citizen Ticket and BitTicket helping to solve?

Citizen Ticket is a ticketing platform. We’re particularly interested in helping small, independent or fringe events with event marketing as we don’t believe these groups are being properly served by the big guys. We help to give them a presence on the web and sell more tickets – simple.

Since we set up in 2013, we’ve become more and more aware of the problems all ticket providers are facing. Ticket touts are of course a well-known issue, but ticket counterfeiting is also a major headache for venues. Crucially, both these issues affect consumer trust and confidence. People worry that they’re being ripped off or that they’ll be turned away if they purchase a ticket on the secondary market. We’re in a good position to do something about this. That’s why we launched our blockchain-backed ticketing service, BitTicket, last year. We want to help bring trust back to the industry and blockchain is instrumental in that aim.

I’ve always liked tinkering with technology. I taught myself web development as a teenager so I could make a bit of money building websites and running online businesses. My first job was with a VR company, which was great for me as I love learning about emerging technologies. When I met Phil, co-founder of Citizen Ticket, the time felt right for me to move into an earlier-stage business. We have a vision of what ticketing should be like and everyone in the team at Citizen Ticket contributes to fulfilling that mission.

How did you get started with blockchain?

I found out about Bitcoin quite early on. This was when 1 BTC was selling for around $8 – and that was considered high! Once I got my head around how cryptocurrencies worked, I was hooked. Not only did I feel we were seeing the future of money but the technology itself fascinated me. When I joined Citizen Ticket, I found out more about the problems in the industry – the ticket touts and ticket counterfeiting I’ve already mentioned. Blockchain by this point was being explored in applications outside of finance and it immediately just felt like a perfect fit. We had a chat about it as a team and agreed we’d make it part of our solution. When we launched BitTicket in May last year, we delivered ticketing for the first real-world event to be backed by blockchain. We’ve not stopped since.

What’s the value of your blockchain technology for music fans?

There’s so many reasons for fans to feel like they’re getting a raw deal. Some platforms actually own a secondary ticket-market platform, meaning they have a lot to benefit from raised prices and immediate sellout. As an example, we launched BitTicket not long after Robbie Williams had played at the O2 Arena in London. For that gig, 80% of tickets were sold by the primary ticket website to the secondary ticket website – so tickets that should have been £40 were going for an excess of £300 each! How are fans supposed to win against industrial scale bulk-buying? It’s so frustrating.

Blockchain gives the industry an opportunity to be more transparent. Why not show that tickets are actually going to fans at the prices originally intended? Those that do this will have competitive advantage, showing fans that they’re operating in their interests. Using smart contracts, we can restrict certain buyers from operating, put limits on how quickly tickets can be resold, or how many times, or even for what price. All this will help fans trust the ticketing industry again.

And what about for those organising events?

There’s one benefit that I think is hugely exciting to event organisers: visibility of who actually attends. Normally, we can see who purchases a ticket, but we don’t know if that person actually turns up at the door. Is it them, a friend, someone they’ve sold it on to? This is what we call a “dead ticket”. With blockchain technology, someone who purchased the ticket can still pass it on, but we know exactly what’s happened. This is a “smart ticket”. This helps event organisers communicate with the final attendee, confirm that they have a legitimate ticket and improve the experience for them overall.

What can we expect to see from Citizen Ticket and BitTicket over the next 12 months?

Of course, we can’t reveal everything. But look out for us doing some large-scale testing of BitTicket at festivals and sporting events later this year. We also want to make people aware of the benefits of blockchain; we want it to feel very accessible, not alien or scary. So one of our focuses will be getting the BitTicket brand out there, and ensuring our mission is in people’s minds.

Do you have any advice for other companies that are seeking to implement blockchain?

The good news is that any company looking at blockchain now will learn from other people’s mistakes. We had to forge our own path. When we first started, Ethereum had only just been released so it was more unproven. We tried working our transactions into the Bitcoin blockchain, but it was a struggle. After a couple of months, we could see that Ethereum was making some real headway and smart contracts generally made more sense for us. We scrapped what we’d done with Bitcoin and moved over.

There is one piece of advice I would give to anyone looking at using blockchain: remember not to overdo it. Something parts of your business are absolutely right for blockchain, others aren’t and you’ll cause yourself a lot of hassle if you try to make everything fit. Ask yourself, “What’s the minimum logic required on the blockchain to run our business?” and go from there.

If you could sum up what blockchain means to you in one word, what would it be?

Trust – of course. There are so many benefits, but ultimately it comes down to this. Using blockchain builds trust, a confidence in a system that no amount of lawyers, observers or notaries could provide. That’s why it’s going to affect every single industry and it’s the best thing about it all.

Find out more about BitTicket or follow the team on Twitter. Interested in learning more? We we will be exploring the benefits of blockchain to the creative industries – including the media – at ‘Creatives: Unblocked’ on 29 June in London. Get your tickets today.

Are you ready for the Blockchain Hurricane? Kate Baucherel Interview