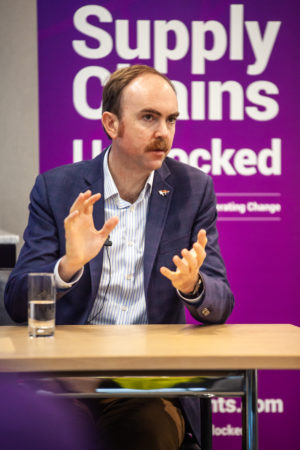 Richard Stockley leads business development for IBM’s global trade applications of blockchain – working with supply chain organisations to harness blockchain as an enabler of digital transformation. Richard has experience in Management, Marketing and Business Process in Europe, the Middle East, South East Asia and North America. Prior to IBM he was CEO and owner of a digital publisher in Vietnam. He has an MBA from the University of Cambridge.

What first got you interested in, or intrigued by blockchain?

I got involved with blockchain by accident in 2016. I was working in New York at the time with the Depository Trust & Clearing Corporation who process trillions of dollars of securities transactions on a daily basis. They were thinking about how blockchain could be leveraged for derivatives and it was among the first major and ambitious commercial applications in the industry. We were working with some super smart folk on some very cool technology – it was this first encounter that piqued my interest and helped me see how blockchain can be applied to significant industry problems. After relocating to the UK, I was asked to head up blockchain for IBM in the UK and Ireland before deciding to specialise in supply chain applications of the technology.

For readers who are new to blockchain, can you explain exactly what TradeLens is and how it differs from existing supply chain solutions?

TradeLens is an industry platform developed by IBM and Maersk to accelerate digitisation in global trade. As a platform (as opposed to a product) its inherent value is enabling connectivity between participants in the supply chain – ports, terminals, carriers, customs, shippers etc. This allows the ecosystem to collaborate in a trusted way with less friction, less paperwork, and fewer manual processes.

We are different from other supply chain solutions because we don’t just bring platform functionality, but also bring together the supply chain network. Five of the top six ocean carriers have committed to the platform, which already accounts for 60% of global container volume. In addition, we have more than 100 ports and terminals onboarded and contributing real time data from source every minute of every day.

TradeLens is one of the most mature blockchain solutions to make it to market, it has been generally available for nearly a year and already has a track record of driving efficiencies in supply chain. While many blockchain solutions are stuck in proof-of-concept phases or stymied by regulatory hurdles, we are very much live and in production.

Isn’t a huge part of the saving down to digitisation and removal of paper-based systems rather than blockchain per se? Are you able to assess how the savings break down as they relate to having a decentralised network?

Blockchain is an important component to TradeLens, but it is true that it is only one part of very comprehensive stack. In the case of TradeLens, blockchain is the enabler that allows a greater degree of digitisation by solving the problem of how you prove uniqueness and provenance of a digital asset.

In supply chains, huge inefficiencies exist from paperwork and manual processes alone. There has long been a desire to digitise these processes, however, initiatives have had limited success due to trust required across organisational boundaries. With blockchain, different organisations can share a common view of a digital asset and, by extension, trust in the provenance of that asset. This process creates a common view of the most up-to-date information, as well as an auditable record of the changes that have occurred.  This is where blockchain shines.

TradeLens has been one of the first to integrate APIs for a shipping industry blockchain platform. How hard was it to get that off the ground and what has been learned in the process?

We see TradeLens enabling connectivity between actors in the logistics ecosystem, the silver thread that sits behind processes and applications. In addition, we see openness as critical to industry adoption. Walled gardens inhibit participation and also leave a lot of value on the table.

Our open API architecture has two key benefits. TradeLens will not wholesale replace in-house enterprise systems – enterprises rely on these systems for processes that are specific to their business – we want TradeLens to provide a flow of data that enhances those existing processes, which means enabling APIs that can easily map between TradeLens and the enterprise.

Secondly, we know we do not have exclusivity on good ideas. While we are creating value-adding applications that harness the connectivity of TradeLens (our invoice reconciliation tool being piloted by a large CPG company is a good example), there are others who can bring new applications, new data sources, and novel approaches that return value to the TradeLens ecosystem. That’s precisely why we built our API architecture to allow others to develop and commercialise applications on top of the TradeLens connectivity.

Outside of Europe, which other countries or regions do you see as being potential blockchain leaders in supply chain and has government policy played a role or is it more about building the right business partnerships?

Technology tends to outpace humans’ ability to absorb change. The biggest inhibitors to the full realisation of technology generally – and blockchain specifically – is our own reptilian brains and the organisational structures we are anchored to. The challenge is to see that platforms allow a new way for enterprises to collaborate and differentiate. This is not easy, but we are hopeful that by investing in the infrastructure, we have created a platform that leverages the benefits of blockchain that can be consumed by business in an way that is intuitive, that has minimal upfront investment, and has limited innovation risk.

Picking leading regions is difficult but Europe is doing very well. I also spent much of my career in Asia, and have seen first-hand how adoption is faster where there are not decades of legacy processes and investments to untangle. Organisations in Southeast Asia that do not have such entrenched incumbent systems can move quickly to capture opportunities presented by novel technology.

What do you see as a likely timescale for widespread use and implementation of blockchain in logistics – will it take a decade or more?

TradeLens alone represents a widespread use of blockchain in logistics. We are definitely out of the lab and into the wild. But logistics is complicated for sure. The broad ecosystem of necessary participants, their variance in both sophistication and use of common standards, and inhibitors to change we discussed above all make our digitisation aspirations ambitious, to say the least.

But we have good reason to be optimistic. By recruiting five of the six largest carriers (noting that these fierce competitors are around the same table and collaborating), TradeLens has already onboarded 60% of global containerised trade, this is a significant vote of confidence. This is shared by the cargo owning community we are engaging, as well as other “facilitators of trade” such as banks.

Importantly, global trade is a foundational element of our economy where efficiency gains have profound and broad benefits beyond just cargo owners and logistics suppliers. 80% of the goods we use every day spent at least some time in a 40 foot container on the high seas.

Adoption will accelerate as value is experienced by early adopters and organisations get comfortable with the technology. This journey will happen over the next 2-5 years. However, as we said at the very beginning, platforms like TradeLens are enablers, the silver thread behind other processes and applications. The use cases that can leverage this connectivity are broad and very exciting.

Where next for TradeLens? What’s on the roadmap for 2020?

Our roadmap has two axes. The first is strengthening the core platform, which will involve continuing to work hard expanding our core value proposition, creating a connected ecosystem of ports, carriers, customs etc; and establishing stable, resilient core functionality around sharing information (events, documents and data) in a trusted manner. We are also working to enhance information sharing by including the ability to build and manage document related workflows – for example the ability to create documents or  assign tasks to different organisations – and enabling automation in the collaboration between parties.

On top of the platform, we are also fostering a rich ecosystem of applications – built both by TradeLens as well as ISV partners. We are working hard on enabling eBOL functionality, which will enable the paperless transfer of legal ownership of cargo as well as applications tailored to reducing financial crime.

This is just the tip of the iceberg. The possibility to align the TradeLens platform with other platform solutions (supply chain, trade finance, insurance) means we start to realise exponential benefits of networks of networks – interconnectivity of business networks that enable frictionless collaboration and trade between disparate parties.

To find out more, follow Richard on Twitter or check out the TradeLens website. Richard will be speaking at Supply Chains Unblocked on 16 October at CMS in London. Get 20% off tickets using code BBFTA20 on Eventbrite.