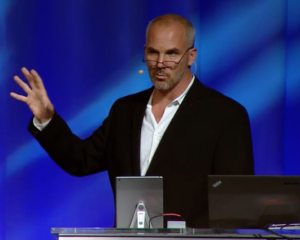 Hi Mark – Thanks for joining us this week on Chain Reaction to discuss how Artificial Intelligence and Blockchain are changing healthcare.

Blockchain technology is not the easiest thing to explain to newcomers. As a regular public speaker, how do you go about explaining it to a non-technical audience and which types of arguments and examples do you find to be the most effective?

Yes, the hardest question to answer is “what is this Blockchain thing?”. I usually take a few different positions on this. One is that blockchain is almost the opposite of the advent of traditional computing where one of the benefits is being able to cut and paste, and easily erase your mistakes. This is a useful innovation but doesn’t help us when it comes to payments because you need to be able to keep track of payments in real-time and not allow double spending. Instead blockchain works a bit like an odometer where you are always going forward and there is no possibility to go back and change the past.

With blockchain, you have a peer-to-peer network which is something like a group of people working together who decide after a certain time period, let’s say an hour, that they will all stop and write down what they are doing on their shared ledger and stamp it with wax. Then they do that again and add it on to the next one. That wax stamp is akin to a block and those blocks are joining together into a long chain, which represents an agreed audit trail of all the activities and transactions taking place over this shared network.

The final aspect is that what is being tracked is not just currencies like bitcoin – although that is how blockchain technology first came about – but also tokens or coins (it has not quite been decided exactly what to call them) which can represent many different types of assets and things we need to keep track of over time – this makes blockchain technology incredibly valuable to business and to society.

Of course, many different ethical implications fall out of that – for example, once Artificial Intelligence is tracking what we do and recording it on a blockchain, how do we forgive or forget? Despite the huge advantages, we also need to be mindful of the human implications of these new technologies, especially when it comes to our healthcare.

What are the types of new innovations you are trying to build at Botanic Technologies?

At Botanic Technologies, we are very excited about the convergence of blockchain, virtual reality (VR) and Artificial Intelligence. If we are able to give an entity a voice and/or a face, it creates a much greater sense of trust when you are working with patients and bodies of healthcare knowledge. We are building conversational interfaces, which will allow us to build healthcare tools that have many contributors. Our bots will be able to assemble and deploy this information and by adding a blockchain layer, this also allows us to use micropayments so that we can even reward users and allow them to monetize their own healthcare data.

How do the healthcare applications you are building represent a step change in innovation compared to what went before?

Currently patients may have to pay to see a doctor and yet the interaction is time limited and the individual doctor may have limited information about a patient’s condition. The systems we are building will amass a wealth of healthcare data that can help to provide a diagnosis, a solution or a remedy.

Research shows that 85% of patients would actually prefer to interact with a conversational interface rather than a doctor. Such personal interactions can sometimes be embarrassing when it comes to our healthcare but it seems that patients really like the idea of a more anonymous and data-driven interaction. It also seems that 85% of users are more likely to comply with their treatment if they use a conversational interface, partly because they have a greater faith in the scientific basis behind the proposed treatment.

The data gathered is valuable from the perspective of the patient but the system also adds value to itself with each interaction. There is a value data exchange which goes both ways. In a system we designed for the Chinese health authority, for example, we were able to link instances of asthma to geographical location, providing a useful dataset for public health officials to draw on for prevention.

Many people are sceptical about the perceived risks of involving new technologies like Artificial Intelligence and blockchain in area as sensitive as their healthcare, do you think patients are ready to embrace this level of technological change?

Most new technologies initially create fear. Take Uber or Airbnb. A few years ago, people would think the idea of getting into a stranger’s private car and using it as a taxi or renting someone else’s private apartment and staying in it when the owners were not there, was completely mad! Yet now both of these companies are hugely popular and successful.

I was leary of about these ideas myself when I first heard of them, but adoption of new technologies is all about how we present and project them and how we adapt. We always need to think about what the ramifications and motivations are behind these systems. The rate of technology adoption represents incredible flexibility on the part of human society but we need to be responsible because today, as users, we have become the product.

However, unlike today’s business models where we give away our data for free to companies like Facebook or Google, Blockchain can actually help remunerate the user and redistribute the value of personal data more widely in society, which is a very welcome development.

How can Blockchain projects take off when there are so few developers who are expert in this field?

Luckily the vast majority of people are new to this technology because it is still in its infancy and real experts are very few and far between. I started getting involved in this technology 5 years ago and it took time to build up expertise and become familiar with things like using digital currency wallets and understanding the underlying software and how it works. Fortunately, hard problems tend to attract the brightest minds and many people are now asking to work with us as well as us reaching out to external experts for help.

What are the key things companies should do to prepare if they are thinking about embarking on a Blockchain project?

The tools that exist are much simpler now. Applications like Coinbase and Kraken are very user-friendly. It’s also much easier to educate yourself either from a technical or non-technical background.

Blockchain technology offers a huge range of choices, even more than the World Wide Web. But it will also be less visible – more of a core plumbing mechanism for a new set of systems and services rather than something the end user is aware of using.

As well as starting with simpler tools, companies can prepare to work with blockchain by considering the core atomic value that needs to be exchanged and the economic implications. What information does your company trade, sell, buy, or exchange? How can you automate the routing and remuneration of those atomic units of value? How refined do those units need to be? Think long-term. Oh, and read all the time! Pretty soon complicated concepts, if they’re simplified, start to make sense. For example, think of a “smart contract” as a coke machine, “bitcoin wallet” as a clear, glass piggy-bank, etc. Think simply!  And read!

What is your predicted landscape for applications of Blockchain in healthcare in 5 years time?

There are so many opportunities that the question for the next five years isn’t what is possible, but what is culturally accepted, implemented, and used.

Of course, our immediate roadmap has conversational systems that interface with a host of different machinery, and anywhere that we see a transferable unit of value we see a potential use of blockchain.

Consider the idea of hospital equipment that is printable. It is licensed and paid for, then printed and used seems a little further out (perhaps in five years). It’s a short step to then printing medication or blood, for example (which is possible today).   Micropayments are proportional to the amount downloaded, printed, and used. Micropayments are then triggered based on quantity of use, duration of use, or other measurements.

You can find Mark on Twitter or at Botanic.

Mark will also be speaking at our upcoming event Healthcare: Unblocked on 13 October in London.