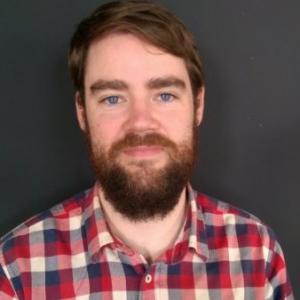 Lawrence Lundy’s work explores the intersections of artificial intelligence, blockchains and the internet of things. He is Partner and Head of Research at Outlier Ventures and pioneered the funds’ investment thesis leading to investments in Ocean, Fetch, SEED, Haja Networks, IOTA, and Sovrin. With a political background he leads Outliers’ thinking on governance in crypto networks.

Hi Lawrence – Can you start by telling us a bit about Outlier Ventures and what you do?

Outlier Ventures was Europe’s first blockchain venture builder and fund. The company was founded by Jamie Burke, who saw potential beyond just bitcoin, and understood that the technological innovations that underpinned it represented the next phase of The Web. Over that time, through applied learning, Outlier thought through the technical and commercial challenges in this emergent paradigm and was able to lead the industry in where the real sustainable commercial opportunities lay. I joined as Head of Research, initially to focus purely on the blockchain ecosystem but we quickly began to see how blockchain was acting as a foundation for other deep technologies. This is where our Convergence VC vision and subsequent community began to take shape.

I know you have been working on an interesting exercise of mapping activity in the Blockchain ecosystem – which countries and which sectors are you seeing emerging as leaders in terms of clusters of activity and outputs?

Our mapping exercise has been extremely interesting because all technological maturation and market diffusion takes on different guises depending on where it originates. So Artificial Intelligence, for example, predominantly came out of universities with a strong AI background like Stanford, University of Toronto, UCL and Cambridge University. Blockchain was born on the internet forums in a decentralised way. One object of our mapping exercise was to ask whether this Blockchain phenomenon was an aberration with no obvious physical clusters or whether it would eventually cluster by sector or by geography. In fact, Blockchain companies have largely maintained their decentralised nature. Where talent is based or where companies are based is not particularly restricted by national boundaries – teams are dispersed and global. Where clusters have formed – such as shipping and provenance companies in Singapore or fintech companies in London – is being driven by need, so we do see clusters of companies driven by application of the technology in certain cases. What is really interesting is how trends towards remote working, the rise of digital nomads, decentralised salary payment services and new funding mechanisms like Initial Coin Offerings (ICOs) and are all combining to break up traditional ways of working. Blockchain companies tend to practice what they preach – decentralisation – and the structure of the traditional firm is being turned on its head by these new Blockchain-based businesses.

As you mentioned, Convergence has become a big theme for you in your blogs and events– what do you mean precisely when you talk about the term and why it is important for Blockchain businesses?

Convergence, as we see it, is Blockchain and other decentralisation tools which provide the foundation enabling other technologies such as the Internet of Things (IoT), Artificial Intelligence (AI), Virtual Reality (VR), Augmented Reality (AR), robotics and 3D printing. In this instance we are agnostic about what type of Blockchain that might be – whether it is the Bitcoin or Ethereum Blockchain, IOTA or some other form of distributed ledger. This set of technologies can be used to underpin and securely scale new services and new businesses.

There are a number of different technologies encompassed within convergence by its very nature. For many people this kind of talk blows their minds in terms of their conceptual understanding. How can we communicate these likely future innovations better to a sceptical or even worried audience?

One of the most important points about the Convergence community we are building is that we all know very little yet – becoming an expert in even one of these areas of technology is hard, let alone in being able to timeline how they combine and converge. The idea is that the bringing together of people will bring inter-disciplinary and cross-disciplinary thinking. This creates a learning experience, an opportunity to ask questions and also a powerful feedback mechanism. Ultimately, the communication challenge may be more about getting these ideas across to policymakers rather than to the general public per se. We have been building various partnerships including with Imperial College at the academic level, along with corporates, startups, regulators from the Financial Conduct Authority (FCA) in the UK and in Singapore to try to improve decision-makers’ level of technical understanding. It is so important, and yet so difficult, for people in public life to grasp issues like Distributed Ledgers or AI. We try as much as possible to simplify and communicate these ideas to policymakers and investors but it’s always a struggle. The timeframe is also a hard challenge – policymakers are always more engaged by short-term priorities and less so by a longer-term vision but it’s not easy to say exactly when all these converging technologies will fully take off, though it is undoubtedly going to be faster than they realise.

To take a recent example, the rise of ICOs has happened very rapidly and companies like Brave and MobileGo have recently raised vast sums in this way. Brave raised $35m in 15 seconds from its recent ICO and Mobile Go raised a staggering $56m. [NB – Bancor ($153m) and IOTA have subsequently raised even larger sums via ICOs/presales since this interview was conducted]. These are massive developments in the marketplace yet it’s hard to get regulators to give a view on this, perhaps because they don’t fully understand it yet. ICOs raise a number of important questions about who can make investments, about who can start a company, and questions the whole structure of the firm, the state of corporate law and methods of raising capital. When we look back in 20 years we will see an enormous shift in the traditional roles of capital, labour, management and shareholders – it’s not clear that the policy environment is ready to anticipate this radical change where workers may be also be the owners of capital and AI could be the management layer.

You spend a lot of time dealing with startups in the very early stages of innovation. What advice do you have for new entrepreneurs wanting to get ahead in the field of Blockchain and Distributed Ledger Technologies?

The key thing to keep in mind is to focus on the customer, the problem to be solved and the business model as the first priorities. Many enterpreneurs get bogged down in having the technology and adapting it to a problem rather than having a clear commercial proposition to use the technology for. They need to ask themselves how much needs to be fully decentralised in order to go to market? Founders have to be pragmatic about this aspect if they want to attract venture capital. There are lots of companies out there who may be building important open-source decentralised features rather than necessarily a full business model. They are unlikely to be the next unicorns and don’t actually need traditional venture capital but they might be able to take advantage of ICOs to raise funding instead. ICOs are a real, disruptive innovation when it comes to funding protocol development and open source development work. There will inevitably be winners and losers – and this is still a very new and untested approach to fundraising with associated risks – but ICOs do have the potential to enable creation of value in areas that traditional venture capital can’t necessarily fund.

You must hear about all types of start up ideas all the time, so can you tell me about an obscure Blockchain application I have probably never heard of?

Some of the most interesting applications of Blockchain come from things in the real world that have yet to be digitised. As part of our research, a while back I came across a decentralised application called Stud Book, which is a kind of Tinder for horses! It sounds a bit crazy but this is actually a pretty useful and innovative idea. In such a competitive and lucrative market, it’s important to know the provenance of your horse and digitising a so-called ‘stud book’ is a clever solution to that problem. The same types of solution are also being looked at in terms of the provenance of other high-value items like wine or works of art. Plus, let’s face it Blockchain has diversity issues – we need more horses in the industry!

You can find Lawrence on Twitter or at Outlier Ventures.

Previous “If charities dismiss, fail to engage with, or underestimate the pace of technological change that is happening…society will miss out on a lot of new opportunities to do good” – Rhodri Davies, Head of Giving Thought, CAF
Next Blockchain Interoperability: Interview with Dave Gorman, IBM