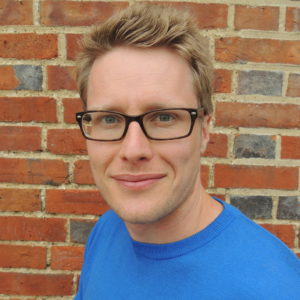 Marcus O’Dair is a senior lecturer at Middlesex University in London. He is also a journalist, broadcaster, biographer and musician.

He is the convenor of the Blockchain for Creative Industries research cluster at Middlesex and was lead author of the cluster’s 2016 Music on the Blockchain report, and a 2017 white paper about on rights management for the Blockchain Research Institute. As researcher in residence at Digital Catapult, he is currently writing a book for Palgrave on the impact of blockchain technology on the creative industries. He also serves on related working groups for Tech UK and BSI.

​​Marcus has published academic research in peer-reviewed journals on business (Strategic Change), popular music studies (Popular Music, IASPM@Journal), and biography studies (Life Writing). He has contributed to edited collections including Jazz and Totalitarianism (Routledge 2017) and Punk Pedagogies (Routledge 2018). He is now editing a book about Mute Records (forthcoming from Bloomsbury).

As a journalist, Marcus has written for publications including the Guardian, the Independent, the Financial Times, the Irish Times, Uncut, the Arts Desk, the Quietus, Pitchfork, Wire and Jazzwise. As a broadcaster, he has been heard on CNN, BBC 6 Music and BBC Radio 3; he previously presented podcasts for the Independent, Music Week and the Barbican.

​As a keyboard player, double bassist and manager, Marcus is one half of Grasscut, who have released acclaimed albums on Ninja Tune and Lo Recordings. Grasscut have performed at Cecil Sharp House, the Union Chapel, the ICA, Koko and Tate Britain, as well as in France, Luxembourg, Germany, Belgium, Holland, Czech Republic, Portugal, Switzerland, Italy, Poland and Slovakia.  As a session musician, he also spent several years on retainer with Passenger, performing at festivals including V and Latitude and live on Radio 2 and Radio 4, as well as playing on Wicked Man’s Rest (2007). He somehow managed to leave, however, before Let Her Go became an international number one.

Marcus has given public talks at the Southbank Centre, the V&A, the Barbican and Edinburgh International Book Festival, as well as internationally.